«Secrets of the Northeast»

Helena Toraño knows well where the secrets of the Northeast lie. Not all of them, because this air that clears the skies of the territories of the Iberian West and wounds with icy ferocity is difficult to catalogue and much more to catch. But his determination to retain this ambiguous, mestizo wind, in which the northern gales and eastern currents are knotted, is the basis of a creative work capable of constructing a story that travels through the different geographies of mystery and its sentiments.

Toraño leaves with an advantage. Her origin and experiences in the plains, in the East of Asturias where the clouds are tied one day and another day to the peaks of the Cuera or Sueve mountains, has made her aware of a topography that is much more than a landscape, a territory where a state of mind lives, a place with a unique way of being, looking at and understanding the world. That strange space, full of simple things but which hide multiple enigmas, is what the Asturian artist has been able to bring to her canvases.

The palms imported by the Indians to the Cantabrian lands, which are shaken by the northeast, do not come from the catalogue of Helena Toraño’s dreams, they are part of her life and her gaze. Just like those seas where dolphins jump over immaculate waves or the skies with cotton clusters broken by a balloon that defies all verticality. But all of them, executed with precise and accurate brushstrokes, with flat tones and with the technique of superimposition and accumulation of images, are some of the postcards that the Llanisca painter sends us from that region that she has known how to draw in the maps where reality mates with dreams.

Metamorphosed into a Cantabrian Patricia Highsmith or a Georges Simenon, Helena Toraño has known how to create with the elements of her biographical territory some scenarios where figures in long mackintoshes, black glasses, tilted hats and knotted handkerchiefs hide their faces, spy on amorous infidelities or flee along the sides where the canvas has its borders. And it is those characters with clear lines and bright colours that unleash the mystery, that fuel the viewer’s concern to unravel the enigmas of our existence. There is also a melancholic breath in his work, similar to that found in Helena or the Summer Sea, those little more than 80 pages that Julián Ayesta from Gijón left us in the fifties of the last century to fossilize a world that was on the run.

And together with the characters who keep the secret, the other motifs that are the hallmarks of Toraño’s work are perpetuated. The vinyls of Françoise Hardy or The Pastels, the naive dolls of every European, the posters of the films of Jean-Luc Godard or Jacques Tati, the gardens of impossible plants, the cats, dogs, foxes and birds… all form part of the material that identifies this happy, melancholic and sinister region in which the artist from Llanos lives.

Toraño’s virtue is that she does not renounce traditions. And she does so in the plural, without prejudice. The mystique of those avant-garde movements that deny the effort and the past successes is alien to her. However, he has no qualms about recognising himself in the Renaissance balances as much as in the creative disturbances of the more sensible artistic currents that Romanticism gave birth to. It would be easy to align it with the followers of the impressionists, of Henri Rousseau and his primitivism, of the Pop-Art of David Hockney, Peter Blake, Luis Gordillo and Eduardo Úrculo or, also, of the Madrid figurativists of the end of the seventies of the last century. Helena Toraño has learned from all of them, but she does not hide the fact that she has also been seduced by the work of Boticelli, Matisse, Hopper and Magritte, Balthus…

That nordic, ventriloquist wind that whispers so many different ways of understanding the world around us, has contributed with its luminous and glacial airs to build the works that make up Top secret, Helena Toraño’s latest production for the Gema Llamazares Gallery. The Llanisca painter, who knows the mysteries of that air that tiles the skies, cools the souls, crests the waters and beats the palms, continues to build with the materials of a lived and felt environment a work of dreamlike breath, with enough creative strength to move and shock. 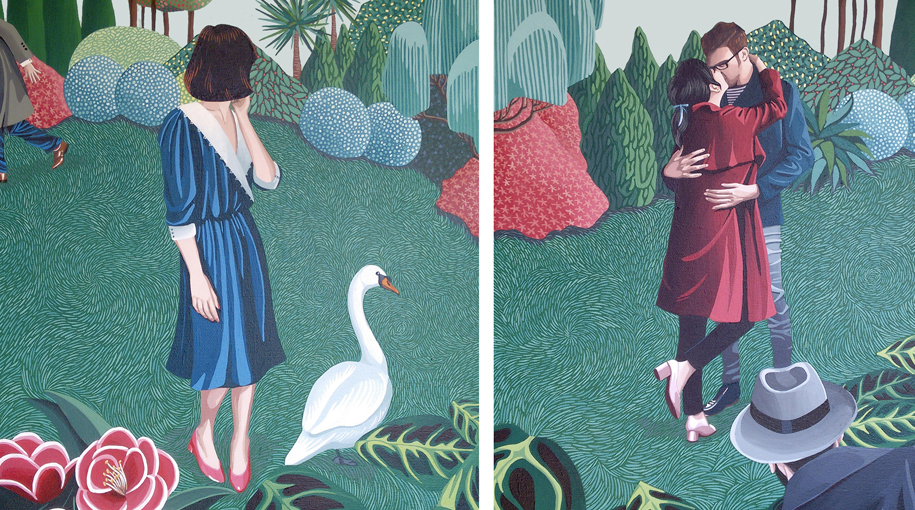 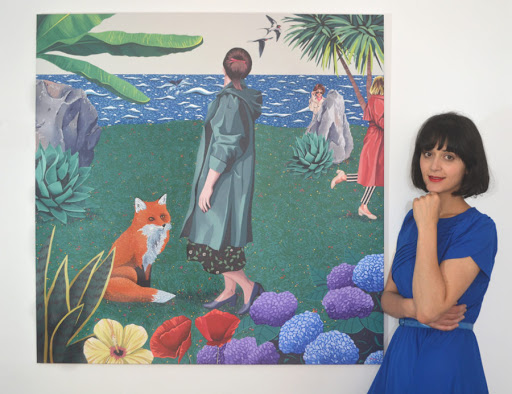