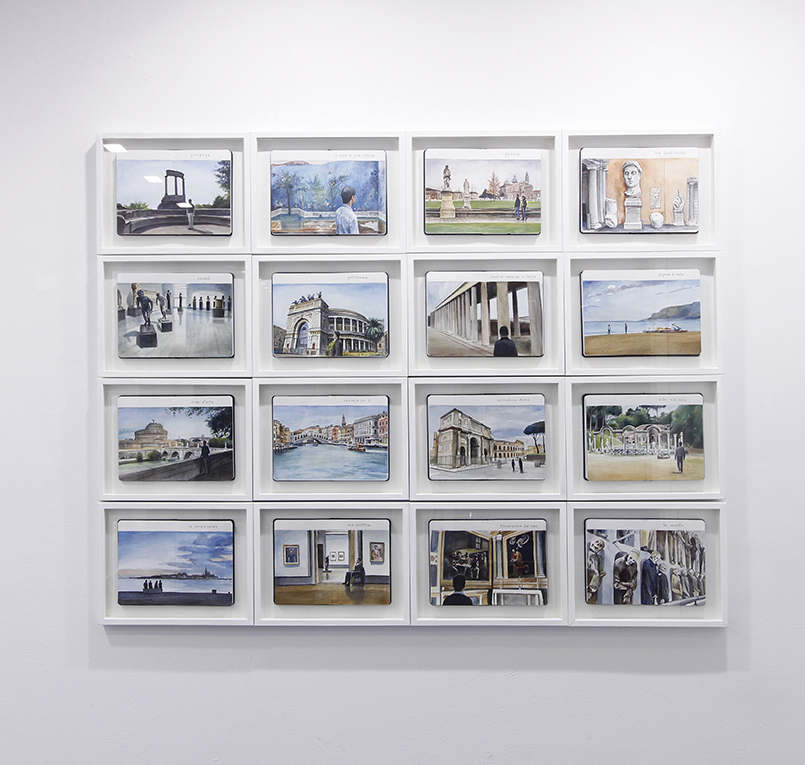 «Me too in the Arcadia!»

The most fascinating journey is a return

Travelling, painting. Travel again and keep on painting. Both verbs are intertwined in Federico Granell’s creative process. It is an eternal return. Rome, Florence, Venice, Naples, Capri, Sorrento, Palermo, Padua, Pompeii. Each and every one of these Italian cities has been lived by the artist. Each and every one of them has been stored in his memory, fixed in his retina and travelled with the spirit of the flâneur who knows how to wander the streets and take advantage of that “gift of wandering” (as Louis Huart would say) for the aesthetic capture of the world around him and, in this case, his subsequent representation.

Come back with me to Italy is a kind of artistic geography with a soundtrack included. It is an evocative game that invites the spectator to hum the referenced melodies while he stands in front of the painting. It is an invitation to Baudelaire’s journey where everything is beauty, everything is order, all luxury and stillness. Claudio Magris, in the preface to the book El infinito viajar, states that “to see a place you must see it again”. That is, to understand the journey as a return. The journey must begin again in a circular movement that not only implies a return home (in the sense of the Homeric Ulysses) but also a return to the destination. A condition of profane status viatoris that makes Granell go on an eternal pilgrimage and return in his own footsteps. And, at his side, we travel. We return with him to Italy.

Each painting and drawing is a stop on the painter’s journey. Work after work we accompany him on his personal Grand Tourcontemporaine. Attilio Brilli analyses in detail the origin of the phenomenon of the journey to Italy from the Renaissance, through the eighteenth-century itinerary of antiquarian and artistic research, to the present day characterised by acceleration and massification (the recently named Venice Syndrome). The writer reveals at the end of the book:
“Those who revealed to the world, with new and different eyes, in their entirety and through characteristic routes, the Italian landscapes and cities, belong to that genre of wandering characters for whom the journey is never a holiday, much less – as happens in tourist transfers – a way of clearing the mind. It is an intense activity, a passionate and fascinating search that pushes you to live and give meaning to every moment”.
Federico Granell is among the group of characters described by Brilli. Beyond the hackneyed and stereotyped visions, he offers an emotional walk through the Italy of his dreams. Each image is an experience of its own, charged with a special atmosphere and also charged with literature. In front of his scenes, Guy de Maupassant’s readers will recall his journals on the Mediterranean in “La vie errante” with detailed descriptions of the beautiful Florence or the extraordinary character of the Capuchin Catacombs in Palermo. From the French writer (who also seemed to have the “gift of wandering”) are the following words: “It is practically impossible for a man who wanders in the world not to mix his imagination with his vision of reality. Travellers are accused of lying and of deceiving those who listen to them. But they do not lie, no, what happens is that they observe much more with their thoughts than with their eyes”.
Travelling, painting, imagining. To travel again, to continue painting and to continue imagining. A third verb being adds to the artist’s modus operandi. Travelling is an intellectual act and each place speaks to the traveller. In this conversation one looks, one listens, but above all (following Maupassant) one thinks. Because travel, for Federico Granell, is also meta-painting. A second level of play is presented in his canvases. An intellectual and aesthetic game through which to reflect, in a double sense, on the art that the journey contains and on the art that art itself contains. We are talking about the painting within the painting. A tautology. The intrahistory of the lived and represented journey; the intrahistory of the History of Art from Antiquity to the most absolute contemporaneity of the Venice Biennale because “a place is not only its present, but also that labyrinth of different times and epochs that intertwine in a landscape and constitute it”. We have returned to Magris in the infinite journey proposed by the works of Return to Italy with Granell, also in the Arcadia! (in memory of J. W. Goethe).
Text: Natalia Alonso Arduengo 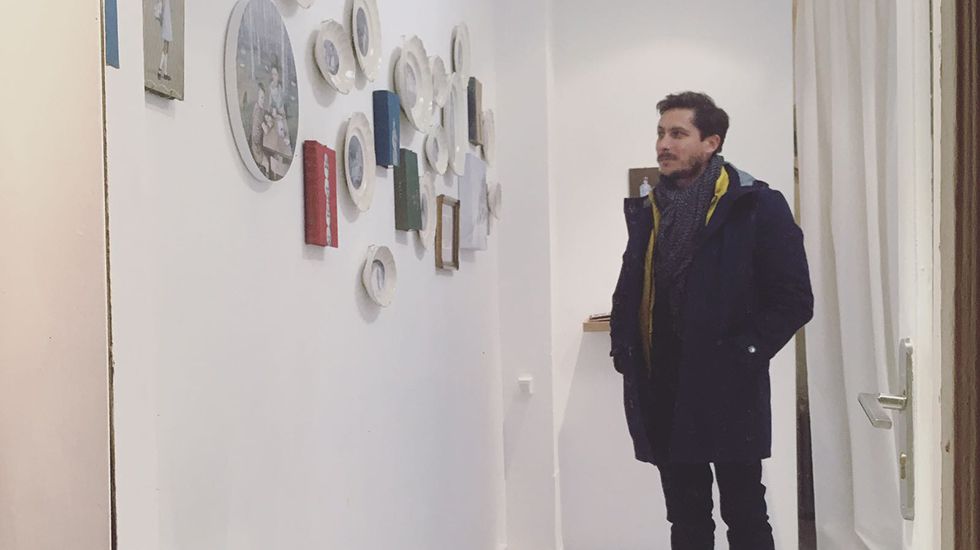