When the future catches up with us is the challenging title of this new exhibition by Avelino Sala at the Gema Llamazares Gallery. The artist goes into regions and current problems (the failure of the Enlightenment, the predatory attitude towards the limited resources of the planet) predicting a future, perhaps inevitable, where things are complex and sad.

It is a direct message, without ambiguity, that invites us to reflect on that unconditional forward thrust of human betterment of yesteryear where only the tired relics of forgotten cultures and values have been left in use; concentric layers of a system of symbolic practices re-decorated and buried under an imperturbable faith in a global horizon of constant progress in the era of advanced capitalism.

For one of the rooms in the space, Avelino Sala proposes a tour of a city “designed” by classic references that are fundamental in the shaping of Western iconography. These figures have as their pedestal unrecognisable books as a metaphor for the historical formations of “discourses”.
The forms of discourse and the games of knowledge, deified by their capacity for expansion, often lead to an insensitive and ruthless behaviour that builds walls to “protect” the great Western legacy. It also brings about relations of production and consumption in the regions of well-being and in the developing areas of the planet that are based on a blind overexploitation of finite resources and lead us to environmental disasters unprecedented in the history of humanity.

The exhibition When the Future Reaches Us is also a reflection on the function of art in the present time. Whatever the response of humanity to so many challenges, artistic creation and social commitment can no longer be reduced to their meaning within the history of art and culture.
Avelino Sala’s proposal is oriented towards a search for freedom from certain forms of aesthetic attention, proposing a vision and reconfiguring subjectivities that come to us from a future devastated by inequalities that reach a high level of transaction and collision. Avelino Sala’s work, which is positioned in a cultural and social critique, not only for this exhibition but also throughout his career, is defined by achieving, thanks to his artistic production, a greater impact on the awareness of essential human principles that can be cultivated from and for our present.

We live in intense times. We are, we know, immersed in a change of cycle, the dystopias of the future, which through science fiction have tormented us, have already reached us. The nightmares of a place devastated by climate change, by the emergence of populist totalitarian regimes, by a stark, ultra-liberal human being totally deprived of the collective are already here. The times are, more than ever, crazy. Walls are being erected to “protect” us; keeping the West safe is fundamental. The Mediterranean is a great cemetery, Mexico will pay for its barrier, the denial of the deforestation of the Amazon is rampant, we are living too many years, Europe is crumbling…… a flock of vultures fly over our heads that do not bode well. Perhaps it is the twilight of a cycle of civilisation, the end of a time: the time of men.
Will ultraliberal democracy be the “end of history” as Fukusima claims? Will this be the last stage in the evolution of humanity and therefore of Western societies?
Here we present the city as the axis of this debate, an invented place where everything happens, where all the scenes are dramatised, a city, no matter what, as a stage where dramas and joys, life and death, the strange locus, the unsettled space.
There are white cities, cities made of buildings that are in turn made of books, of buried, fossilised knowledge, a telluric image of layers and layers crushing each other, an impossibility of seeing things because of our own inability. It can be a global city. A city of cities. The skyline of a devastated world that has its own gods. A strange cosmogony that forms a new scenario, the possibility of a (invented) world that offers justifications of existence that, symbolically, satisfy us.
Where words emerge on its walls, the words, concepts, past ideas of others appear in its spaces. We glimpse conceptual messages, in walls that melt, it is the thaw of texts.
We find ourselves at the doors of an annihilating anthropocene that does not cease to be the angel of death, an exterminator of other worlds but also of this one. And suddenly doubts arise, those that plan on recurring themes…the need for Art, its function, the finiteness of life, questions and queries that accumulate…all that which gets stuck in thoughts and reflections that leave us petrified, perhaps we can only free ourselves if we look into the eyes of the Gorgon, then the future cannot reach us, we will continue the flight forward in a time that is predicted to be long, because the desert continues to grow. 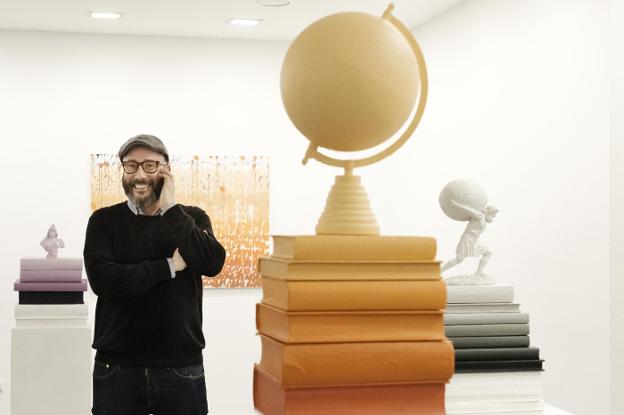